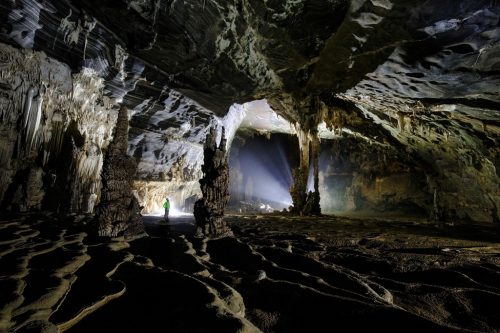 Among  the 57 new caves announced by the experts , Hang Tien 2 is considered a  beautiful cave. This cave has been licensed for tourism by the Quang Binh Provincial government  in early July  2016.

Along with Hang Tien 1, Hang Tien 2 is called ” anonymous Paradise ” in  mountainous region, Cao Quang (Tuyen Hoa district) bordering Tan Hoa (Minh Hoa district). This is the last cave of Tu Lan cave system, located outside the national park of Phong Nha – Ke Bang National Park, which is known as the Kingdom of the cave.

Hang Tien 2 is 2,519 meters in length. The cave has the deepest place about 94 m above the ground. There is a nice stream outside the cave. Its mouth is about 3 meters high but only 1.5 meters wide. The most prominent feature of Hang Tien 2 is the border (on) on the ceiling of mysterious rock . The main arch of the cave is about 400 meters long , about 30 meters high. Tien Cave Tien Cave 2 and 1 are both dry caves, a stream just created in the flood season. The cave’s ceiling is with countless colorful paintings. Many sections have walls with beautiful stalactites. The stalactite is formed from hundreds of years with many shapes makes up the beauty of the cave. Because the cave’s natural beauty is so rare , It is named Hang Tien – Fairy Cave, associated with the legend, “The fairy down to earth”.

Previously, the local people explored Hang Tien 1 and 2 but they don’t have any specialized agency surveyed before. In 1994, the British Caving Association made a survey this cave for the first time . Last March, the cave experts  continued to discover  the entire length and width of this cave as well as made specific plans on tour operators, submit them to  the People’s Committee of Quang Binh province.

On the same day with the announcement of 57 recently discovered caves in Quang Binh, the provincial People’s Committee allowed the Oxalis company  open  tours, taking tourists to the Hang Tien 1 and 2 according to the tour experience (1 day), exploring (2 days) and exploring the cave system with Tu Lan (5 days).

Mr Chau A – the CEO of Oxalis company  said that “Hang Tien 2 will officially welcome guests from the beginning of July. The tour will have the number of tourists from 8-20 people.