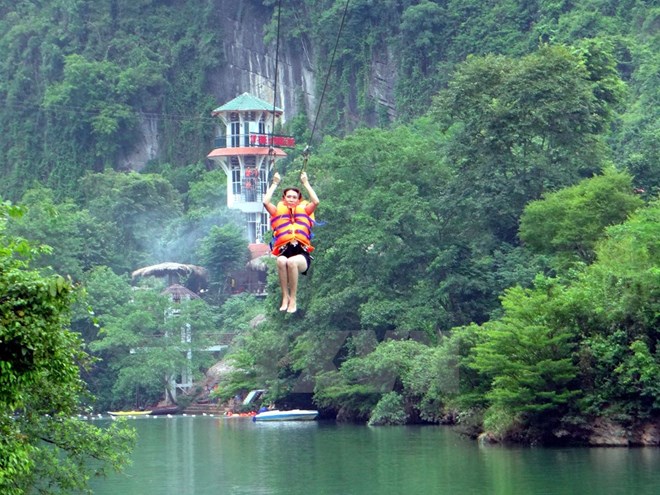 Hang Toi (Dark Cave) is about 50km north-west of Dong Hoi belong to Son Trach commune, Bo Trach district, Quang Binh. It is the only cave in Vietnam that has opened “cave mud bath” tourism service, attracting both International and Domestic Guests.

Located in the heart of the Phong Nha – Ke Bang National Park, Dark Cave is typical of the geological formations from 400-500 million years ago and it was found in the years of anti-America resistance war by local people and used as a bomb shelter. The British Cave Research Association was first discovered in 1992 and named Hang Toi. This cave is a branch of Phong Nha cave system with 5,258m long and 80m high; the entry of cave is 30m high and 10m wide with heavy forest around the cave mouth.

Hang Toi has a primitive beauty with thousands of several spectacular stalagmite and stalactites and there is a natural lake (Thuy Tien lake) and mud bath of 20m2 wide is very good for the health.

This is a shelter of many species of animals like bat and swift, especially, Ha Tinh langur – one of primate species listed in the Vietnam Red Data Book.

Currently, the Dark cave has been managed combining with Chay river – dark cave by Phong Nha – Ke Bang tourism centre. Participating in this tour, visitors will have a chance to enjoy zipline on air lengthening over 400m before getting inside the dark cave by professional caving equipment and have mud bath.
After successfully exploring and mud bath the cave, it’s time to take could i have herpes the kayak and paddle back to the boat station.