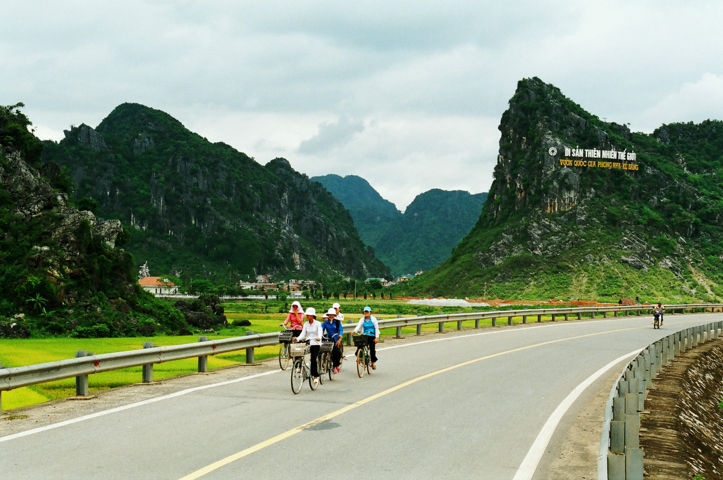 Phong Nha – Ke Bang National Park is located in the ecological site of North Truong Son, covers administrative borderlines of Bo Trach, Quang Ninh, Minh Hoa districts (mainly Bo Trach); about 50 km northwest of Dong Hoi city, about 500 km south of Ha Noi capital, is evaluated as one of the 238 globally important ecological regions, with ranges of calcareous mountains which have almost been developing continuously with relatively unified components, is the largest Karst region with an area of over 200,000 ha. It is a typical sample of geological process of Karst category and formation of caves which have been taking place globally, not only in the field of biological diversity but also the best scenery in caves of the world .

Phong Nha – Ke Bang area has a group of over 300 caves multi – shaped known as the “Kingdom of the cave”, where there is a mystery of wonders and attraction, a paradise for scientists in caves, explorers and tourists. Up to now, the British cave research association in collaboration with the Geography Department of Hanoi National University has surveyed more than 170 caves with a total length of hundreds of kilometers, which have been published on the journal of International Caves  – No. 48, July 1994 and valuated as one of the most beautiful sights with characteristics as follows: the cave with the longest underground river, the highest and widest entrance, the most beautiful sandbank and reef,the most beautiful undergroud lake, the most beautiful and widest dry cave, the most spectacular stalactites, stalagmites and longest water grottos. Among the caves, Phong Nha is really prominent with surveyed length of nearly 8 km, mainly with underground rivers, Vom cave (Arch cave)  is more than 15 km long, Paradise cave is 31.4 km which are included in the list of the caves with the longest underground rivers in the world.

Along with the miraculous cave system, the Trooc river, Chay river and Son river in  Phong Nha Cave – Ke Bang region with the fresh blue streams winding among the rock mountains with forests, have created a poetic beauty as a magnificent water – color  painting.

The primeval forest Phong Nha – Ke Bang with tens of top of mountains of more than 1,000m high, full of obstacles and no human footprints, is an attractive place for climbing and exploration. For instance, Co Rilata peaks of 1,128 m high, Co Preu of 1,213m high. Lying among the peaks over 1,000 m, suitable for ecological tourism and climbing such as mount Phu Sinh of 965 m high, Ma Ma of 835 m high. Especially, mount Ma Tac of 721 m high.

Besides the vegetation and wild animals, Phong Nha – Ke Bang region is also the place where the highly valuable historical and cultural heritage of many ages have ever been and is currently existing such as archaeological heritages of prehistory, Cham culture, and ancient Viet, vestiges of the base of resistance war against the French of Ham Nghi king in late 19th century at Mai Rai mountain and well-known places such as Xuan Son ferry, Ho Chi Minh trail, the Quyet Thang road No.20 which have entered into the legend associated with brilliant feats and lofty sacrifice of Vietnam people in the war for independence and unification of the fatherland.

In addition, in the Phong Nha-Ke Bang region live mostly  Chut – minority ethnic group, a few Viet and Bru-Van Kieu ethnic. In Quang Binh, there are about 3,500 heads  Chut-Sach, Chut-May, Chut-Ruc, Chut-Arem, Chut-Ma Lieng people who mostly scatter in Tuyen Hoa, Minh Hoa and a few in Bo Trach district. In Phong Nha – Ke Bang area, about 2,450 people of Chut minority ethnic present in Minh Hoa and Bo Trach districts, mostly of them are above mentioned clans, except Chut-Ma Lieng

The ethnic people of the Chut ethnic group (named as Chut Poong) and their languages that is guessed to be divided from first Viet-Muong language in about century V-VI. Name “Chut” means ‘Rem Da in Vietnamese”, means “Limestone curtain in English”.

The Chut’s people is now agriculturalists, but they used to earn a living by hunting, picking and live in extremely backward and wild conditions. Most of all Chut minority ethnic lived on shifting cultivation and wandering hill tribes in forests and caves … Today, spiritual and material life of the Chut ethnic group has been improving step by step. The Chut’s people culture that is the object of study of many scientists and it is also the attractive places for minority ethnic people cultural tourism in Phong Nha-Ke Bang Area.
During the past years, Phong Nha – Ke Bang as become a favorite tourism place of  the tourists. The number of tourists has increased more and more, especially from the time when Phong Nha – Ke Bang National Park was recognized as a World Natural Heritage. Together with My Son holy land, Hoi An ancient town, Hue ancient capital, Phong Nha – Ke Bang World Natural Heritage formed and opened an original tourist route “the Central Heritage Road”, which will create the atraction to tourists.