Quang Binh to promote its tourism on Tripadvisor

Quang Binh to promote its tourism on Tripadvisor 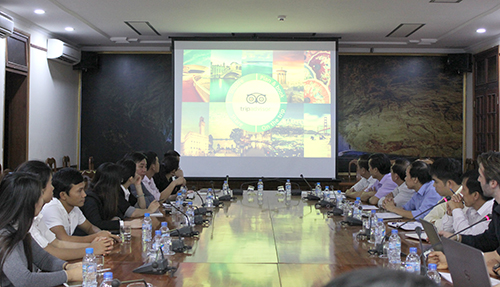 The meeting was attended by representatives of related agencies and some travel business enterprises across the province.

Tripadvisor is the world’s largest travel site with 48 markets worldwide and 350 million average monthly unique visitors, enabling travelers to unleash the potential of every trip. TripAdvisor offers advice from millions of travelers and a wide variety of travel choices and planning features with seamless links to booking tools that check hundreds of websites to find the best hotel prices.

At the meeting, Mr. Matthew Zatto, destination marketing sales manager of Tripadvisor in Southeast Asia region, suggested Quang Binh authorities should build a system of information on the current tourism services, provide tourist information on all websites, including those of local companies, about destinations and connecting tours, and choose a keyword for the local tourist industry so visitors can easily search for it on the Internet.

Speaking at the meeting, Vice Chairman of the Provincial People’s Committee said that Quang Binh has offered some plans for tourism promotion in many different forms in the past time.

However, there has been little international advertising for Quang Binh so far due to a limited budget although the province has huge potential. This has resulted in very few international tourists visiting the province. Thus, provincial leaders have decided to turn to TripAdvisor for publicity, Vice Chairman Tran Tien Dung added.

Vice Chairman Tran Tien Dung also tasked relevant agencies and bodies with proceeding first with these suggestions before signing an official contract to promote the province’s tourism on TripAdvisor.
Quang Binh is famous for the Phong Nha-Ke Bang National Park, which is a UNESCO World Heritage Site and the home of Son Doong – the largest cave in the world now.

Producers of “Kong: Skull Island”, a reboot of the King Kong franchise and serving as the second installment in Legendary’s Godzilla–Kong film series, came to the province in February for shooting certain scenes after being impressed by the landscapes there.

The American Broadcasting Company featured Son Doong in its signature live program “Good Morning America” in May, captivating millions of viewers around the world.