When travelling to Rao Thuong Spring – En Cave tourists will enjoy a romantic combination of rivers – springs – mountains of Phong Nha – Ke Bang with wonderful places in heaven. In a journey to Hang En, one of magnificent cave in a system of 300 large and small caves in limestone area of Phong Nha – Ke Bang National Park, Quang Binh, visitors will have opportunity to enjoy the untouched beauty, the grandeur of the vast primeval forests, the charming green of Rao Thuong spring, the landscapes with endless beauty that nature has bestowed. Also, they have a chance to experience the lifestyle and customs of Bru-Van Kieu ethnic minority people living between the majestic Truong Son range.

From the center of culture and ecological tourism of Phong Nha, Ho Chi Minh Trail West tourists begin journey exploring En Cave. The path to the En Cave, you have to pass magnificent primeval forests with tingled sounds of birds and gibbons and swarms of butterflies. Climbing on the mountain, tourists will pass wading streams, along zigzag trails in dense forests with carpet of sweet dense decaying leaves.

Strange creatures, towering trees reaching up to the sky to welcome the sun, the quietness of the mountainous area… pure and clear atmosphere, the sun cannot shine. After nearly three hours through the jungle, crossing the long distance about 4km, you would stop in Ban Doong…

Ban Doong is a small village of Bru-Van Kieu ethnic minority people living almost isolated in the core area of the Phong Nha – Ke Bang National Park with 6 households and 21 people, local community in Ban Doong live leisurely and peacefully like their compatriots of hundred years ago. Mr. Nguyen Sy Toa, 64 years old, being an innocent and pure-minded person, was elected to be the village chief, community of Van Kieu ethnic people in Ban Doong like a strange musical notes in the journey to discover wonderful nature.

Rao Thuong is also called Doong spring derived from the top of U Bo Mountain and some small streams on the Truong Son range. This stream is not deep and there are many mudflats. Cool and fresh spring water helps visitors observe the fish swimming around. Both banks are limestone successive mountains, which are interwoven with thinned forests stretching as far as of sight making more excitement for tourists coming to En cave. 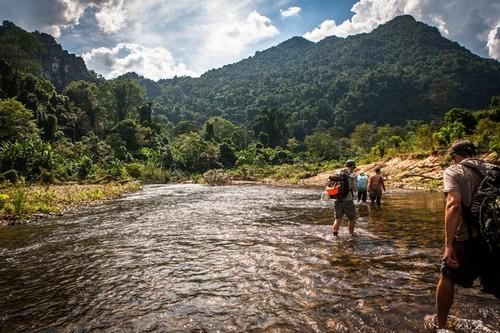 Rao Thuong stream is smoothly winding under massif of limestone between the two ancient forest canopies. Far a distance, Rao Thuong looks like undergrounding deep into the mountains. Rao Thuong is as mischievous maiden engrossed with playing hide and seeks. When winding, when disappearing between two cliffs, sometimes unexpectedly spreads immensely to a few hundred yards and then quickly vanishes among the dense forest canopies.
Going along the steep cliffs, thinned forests still remain footprints of wild animals and then En Cave suddenly appear after a corner … the door of En cave is in front, at a distance, among immense mountains, En cave mouth open like a giant creature that you are just the man are humbled by the greatness and superficial world of it.

Southeast entrance of the cave is wide near 100m, divided in half by a giant stone pillar. At the entrance, there are many sedimentary pebbles, gorgeous and vast gravels. Stones like having deep sleeping for a long time; they are just scrambled under feet of people standing in the cave. Around the cave are cool green forests, very suitable for camping. En cave was first described in 1994 by group of British Royal caving with 1.645m length, more than 170m width, and as high as 120m. Nevertheless, just by the numbers, you would be hard to imagine stunning beauty of the place.

En Cave has three doors, one dooris located halfway up the mountain, and the 2 left gates are located at the foot of the mountain, which has a door to the southeast and the northwest entrance. Two entrances at the foot of mountain follow direction of Rao Thuong spring. This is a rare feature compared with many other caves in Vietnam. The reason the cave named En Cave because it has many Swallow living. Hang En became popular with the native people a long time because it used to be a residence of Arem ethnic people from thousands of years ago. Previously, when Arem people still lived in En Cave, swallows annual built nests every season, they often climbed cliffs and bare caves to catch child swallows for foods. Nowadays, though Arem people moved to settle near the 20 Quyet Thang , they have returned to En cave to organize eating swallow festival to give thanks to gods of the forest, the mountain on the fifteenth day of the lunar calendar in May.

In the cave, you will see three lakes separated by the small mudflat and bedrock ranges piled up together. On the ceiling cave, cliffs have many stalactites with diversified shapes and particularly swallow’s nests. Sunset and thousands of swallow wings at entrance. Their chirrup likes the remixes among beautiful green forests, causing massive cave never lonely.

Stalactites in a cave are not enormous by the flow of the flood of erosion from millions of years. However, the stream in the cave is very miraculous, Rao Thuong stream continue winding, curving as S-shaped, overcoming the low mudflats, rocky clefts, being dimly visible in En Cave. Stalactite dunes are in various shapes and colors are scattered everywhere. Its flow is as reluctant to leave this magnificent cave.

From the entrance to the depth of about 1km, a sedimentary sinkhole created a skylight, bringing sunshines down sapphire stream, painting a magnificent picture. Scenery is like in Heaven. Feeling human beings are so small in front of a spectacular cave. Cold air of stalactites, sapphire of fresh stream that you have to immerse myself down to get to the other side that people are still lightheaded, as in fairy stories.

Entrances of En Cave are a round arch with enchanting beauty. One is a strange mighty door; another one is 83m in high, 35m in width, making groups of caving surprised: “It’s really majestic. We have never seen such an entrance. Humans too humbled by this entrance. “This is also a place where photographer, Carsten Peter selected as the theme for the shooting to give birth to works “En Cave” has been voted by National Geographic magazine is as one of the most beautiful natural images on March, 2011.

The unique features, which Phong Nha and Heaven caves don’t have of En Cave is in the blue colors of the river and light shining from skylights make the scene be more sparkling and fanciful. En Cave is like a fairy world with diversified flowers and grasses. From the cave overlooking the entrance tourists may see lively landscapes, spacious sandy beaches and lush green pristine rainforests ….

According to geomorphological experts, besides stunning beauty of En Cave, it also carries the burden of flood drainage valley for Ban Doong. Without Hang En is as an enormous button, in flood seasons, floodwaters from upstream will turn into Ban Doong a submerged swamp… Geomorphological experts say that without En cave, the flood drainage in the valley of Ban Doong become unsolvable and likely become dangerous swamp.

Nevertheless, the appearance of En Cave brought a life to a vast valley with a hundred hectares. In En cave, scientists also saw other migratory of vegetation into the grotto. The seeds of the ferns, other trees follow annually flood flows into the cave, they float downstream and cling to the rock cleft and then, when the sprint, we start a new proliferation in a cave spectacularly. With En cave, British Caving Association said it was spectacular cave, a standard form of movement of crust remaining hundreds of millions of years.

Let come to Rao Thuong – Hang En to explore this spectacular caves to be immersed in the mountain and primordial forests of Phong Nha – Ke Bang national park with sound of chirping birds and murmuring streams, rustling of trees, which dispel all anxiety your daily life. Combined with activities such as camping, fishing, bathing spring, observing Leaf Monkey, tourist can visit a highland village – Ban Doong to perceive traits of primitive living of ethnic people in the heart of heritage. Enjoying the rustic dishes of local people such as sticky rice and boiled chicken, vegetables are picked in forest to have delicious soup, fish in the stream of Rao Thuong grilled fragrantly over an open fire. Surely, whenever you go, you will remember a journey to Rao Thuong- En Cave and memorize all the usual dishes, but with a very distinctive aftertaste of Phong Nha – Ke Bang…