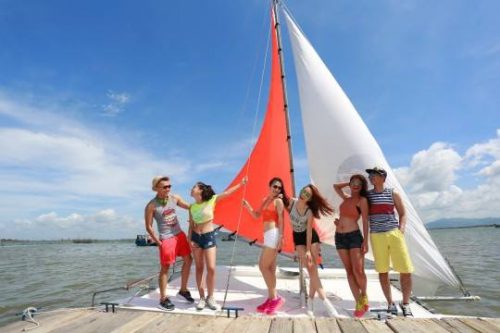 A sailing performance featuring 13 European-style catamarans and a number of social activities will be held soon at a beach in Quang Binh Province.

The event, the first of its kind in the province, runs from July 13 to 20 at the Nhat Le Beach in Dong Hoi City.

Organised by the province’s tourism association in an effort to bring visitors a new, positive tourism image after a number of environmental incidents, the performance will also include several engaging activities.

Participants will be able to partake in a simulation tour which allows them to be a sailor, or watch the parade of sail from the lighthouse to the Quan Hau Bridge.

The European-style catamarans, featuring a four-meter mast and measuring three meters in length, have been transported to Quang Binh from Vung Tau City.

According to local authorities, following the inaugural edition, the event is expected to be held annually with the aim of attracting more tourists to Quang Binh.

In early May, a first-ever sailboat race also took place on Phu Quoc Island off Kien Giang Province as part of the activities to celebrate the 2016 National Tourism Year.