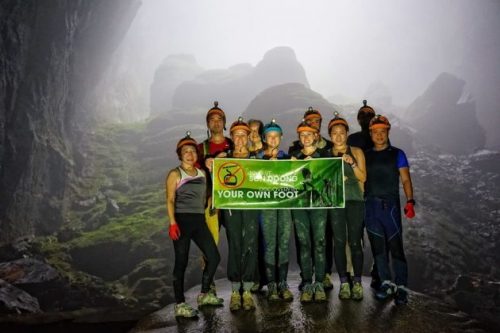 According to information from oxalis company, in 2016, they have effectly taken the expedition tour of “Son Doong”, meeting the requirements of visitors to discover the outstanding universal values of Phong Nha Ke Bang National Park

When visitors participate in this tour, protective equipment such as life jackets, head-lights, trekking boots/shoes will be supported for them.

A rescue team to make a ready for first aid for visitors when the problems happen; bought risk issurance for visitors; setup stair system to make sure safety without affecting to environtmental landscapes, eliminating the negative impacts to environtment and cave landscapes
has established

Moreover, the company also implemented work of popularlization on the magazines such as National Georaphic, The New York Times… and conducted a popularisation programme on the channel of VTV “Discovery of Vietnam”;
built website and published tour brochures, booklets.

Especially, through the film “Kong: Skill Island” and organized a cave excursion for ambassadors from UK, US, Argentina, Sweden, Italy, Australia, and the Czech Republic.
Tom Maliowski and Miss Universe Vietnam 2008 runner-up Duong Truong Thien Ly , Assistant Secretaty of State, contributing to make a strong impression on international visitors and spreading beautiful imaginations of Quang Binh tourism to the Earth.

Besides, Son Doong has been recognized as the top destination in the world by travel magazines. Total income from January to August of 2016 nearly achieved 32 billion dong, of which 3,2 billion dong in taxes and over 3,4 billion dong in business revenues tax were collected.

Reportedly, the management board of Phong Nha Ke Bang National Park submitted to the provincial People’s Committee for asking a permission to open tour “Conquering Son Doong – the world’s largest cave” .The tour Son Doong will be organized for next year 2017 (from January to August) to contribute and promote socio-economic development of the locality.