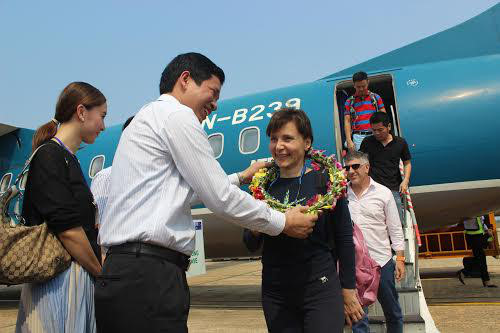 That was unforgetable trip being full of fun experiences of the ambassadors. They had opportunites to discover  Son Doong cave – the world’s largest cave.

On 11th  May, 2016, the group of ambssadors from many countries ( such as Argentina,  Sweden, Italy, Britain, Australia, the Czech Republic), representatives of the UNESCO in Vietnam and the United States Assistant Secretary of State arrived Quang Binh to join the program “Conquering Son Doong – the world’s largest cave”. There was also the participation of Miss Duong Truong Thien. The group was led by the Viet Nam Ambassador – Pham Sanh Chau, the Director of External Relations and UNESCO, Culture Ministry of Foreign Affairs in Vietnam.

Tran Tien Dung, the Vice Chairman of Quang Binh gave warm greetings and best wishes to the group of ambassadors. He hoped the ambassadors to have a good  trip with unforgetable experiences.

“Through this trip, the ambassadors will help Quang Binh in the promotion of tourism and introduce many visiters to the province …” – Mr Dung said.

Mrs Camilla Mellander, the Ambassador of Sweden in Vietnam, said: “I only know information about Son Doong through the media and once wanted to visit. So, taking part in the tour “’Conquering Son Doong – Caves the world’s largest” ‘is a very exciting experience for me. I am impressed with the preservation and exploitation of natural world Heritage Site of Phong Nha-Ke Bang in Quang Binh province. It determines that the province Quang Binh doesn’t  pursue profits. Quang Binh limits the number of visitors and the human impacts on the world’s largest cave Son Doong … ”

Reportedly, the delegation of Ambassadors discovered Son Doong  cave for 5 days from 12 to 17th May , 2016. According to statistics, from the beginning of this year, there were 216 people conquering Son Doong, in which most visitors come from the United States with 95 people.