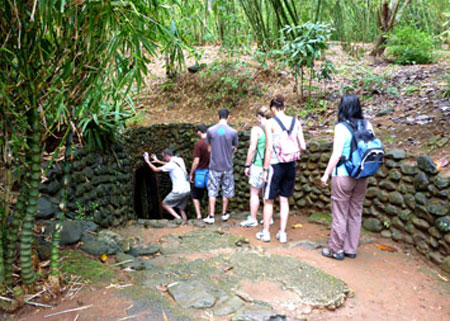 The Vinh Moc Tunnels are located on the coast 37 kilometers north of Dong Ha. When the DMZ, the dividing line between North and South Vietnam, was created along the Ben Hai River, the village of Vinh Moc found itself at the precarious southern edge of Northern Vietnam.

Secretly built between 1966 to 1967, the red soil had to be dispersed under the cover of night to avoid detection by enemy surveillance. Three different levels were constructed – 12 metres, 15 metres and 23 metres deep – with 13 entrances/exits, including seven to the coast. Not only did this provide a breeze for ventilation, it was important for supply lines to the sea. 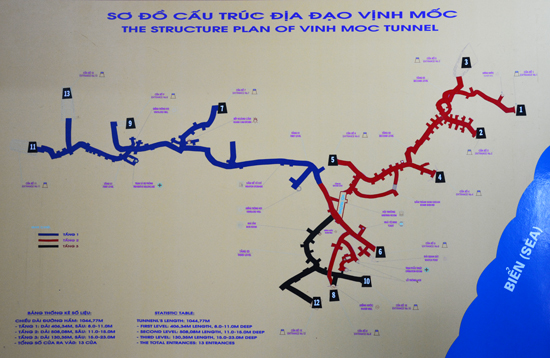 You will lost, if you don’t take the map

The Ho Chi Minh Trail wasn’t one specific trail. It refers to the entire effort by the North across a network of interconnecting channels to secretly deliver troops and munitions to their fighters in the south. Con Co Island just off the coast from Vinh Moc became part of the north’s Ho Chi Minh Trail of the sea, and supplies were moved to the island via the tunnels. Our DMZ guide explained that while the Americans did not know the exact location of the tunnels, they knew enough to bomb the area so in three years, seven tons of bombs were dropped per person living in the tunnels. 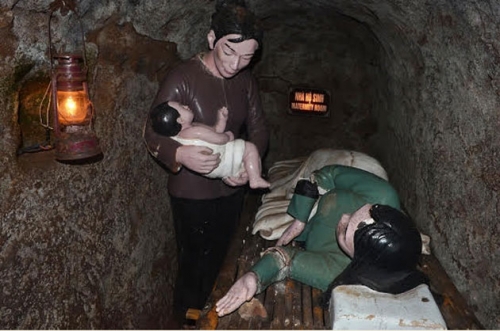 The life of the people in Tunnel Tunnel is reproduced vividly

When someone sounded the alarm of the imminent bombing, villagers moved underground and remained there for as long as it took, be it a few minutes or few days. The longest continuous stretch was for five days and five nights. Entering the tunnel through a nondescript hole in the ground, as you move down, down, down into the labyrinth, darkness, ceiling and walls envelope you and it sinks in: 300 people found shelter here for six years. You’ll see nooks used as sleeping quarters, a meeting room and kitchen built with a clever system that could release yet hide the smoke. They played movies with a generator. There was an operation room, a nursery and even a maternity ward – 17 babies were born in the tunnels; six of those people still live in the village today. 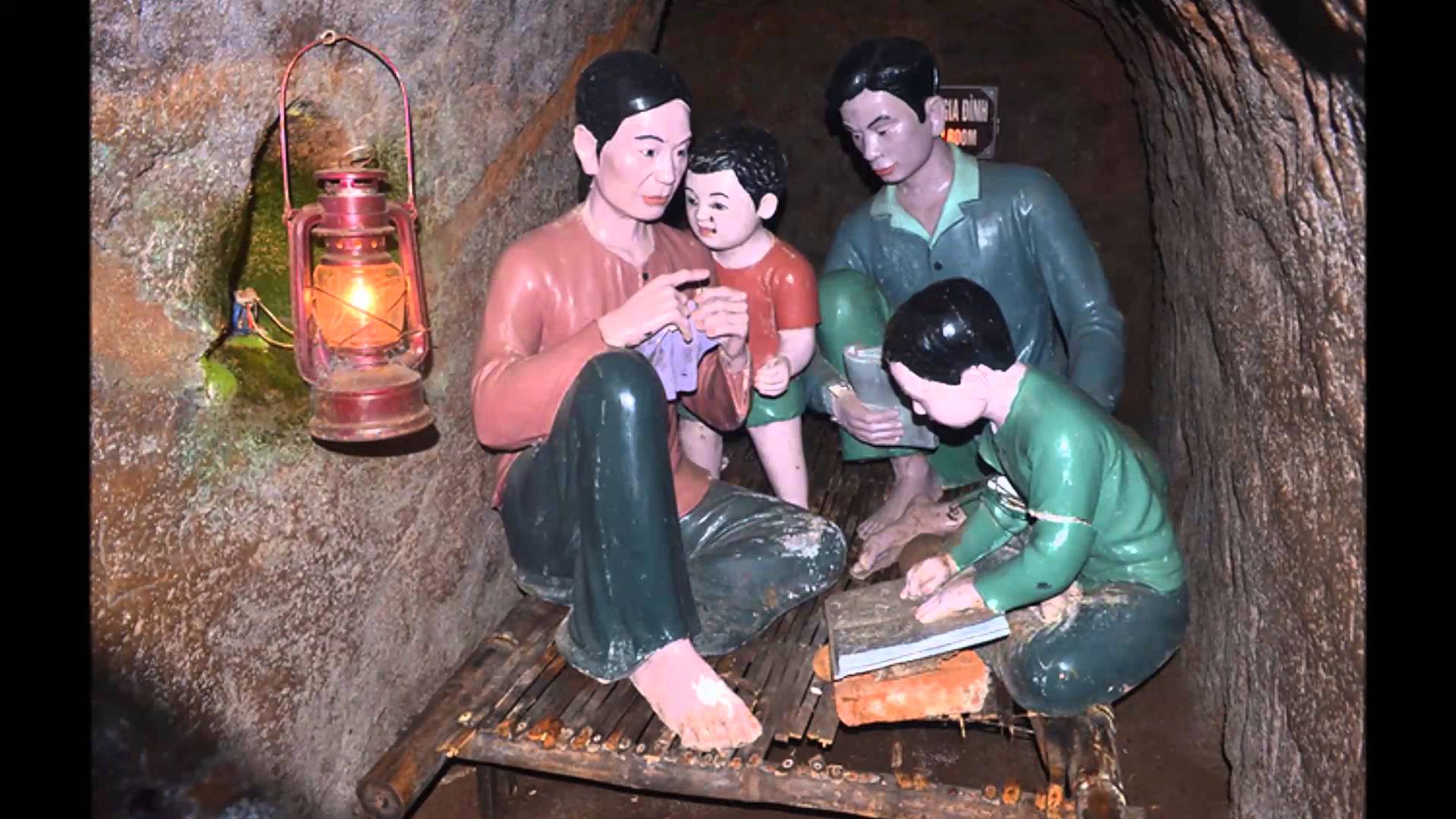 There were about 96 families lived in the tunnels

Keep in mind that Vinh Moc isn’t the only tunnel system. It is the longest and largest, but there were 114 in Vinh Linh district, with miles of trenches connecting village to village. Vinh Moc survived the bombings but other tunnels were not so fortunate. Some 28 sustained direct hits and souls were buried alive.

Vinh Moc is always included in DMZ tours and it is the highlight. You can do it on your own but having a good guide (with a flashlight!) will illuminate the experience with information. They’ll also point out every slippery step and lead you through the confusing labyrinth.

Tourist shuttle buses also run between Phong Nha/Dong Hoi and Hue that include a stop at Vinh Moc and the Ben Hai River, a good way to cover this site if you are short on time. We saw it advertised in Dong Hoi for 500,000 dong per person.

While the tunnels are bigger than the Cu Chi Tunnels, they are still very small (approximately 1.6 metres tall and 1.2 metre wide) and most visitors will have to awkwardly stoop while walking. It will be a struggle for big folk. Walls are damp and muddy – don’t wear your finest frock. The unexpected dioramas of people in parts of the tunnel will make you jump out of your skin, adding to the vividness of the experience.

We don’t feel the most comfortable in tight underground spaces but we were fine. It certainly helped that it was just us and our guide and we had additional lighting with a torch. It was also cold season, and our hats off to the tunnel builders because the cross-ventilation construction brought in the fresh sea breeze. However, we can imagine it would be tough if it is hot and you are in stuck in a conga line of people. If you think you’ll  feel antsy, wait for the groups to clear out. To those who get claustrophobic: it is probably not for you.

If you are going alone, bring a torch and take a photo of the map at the small museum. Some of the tunnels are not lit. We entered from entrance 3, went out at 6 to look at the beach (very pretty by the way), then re-entered finally exiting at entrance 5.

How to get there from Dong Hoi city

You just go on the 1A high way to the south. From the Ben Hai River, head one kilometre further north on Highway 1. Veer right onto main road TL70. It’s all unmarked small roads from here on and you generally want to go north-east. One suggested way, from Highway 1 travel 2.4 kilometres on TL70, then turn left and head north 4.3 kilometres. At the junction, turn right – it’s 4.5 kilometres heading east then north on TL573.

If you want to enjoy the tour, connect to Netin Travel